And at the evening’s end
I wanted to be my voice.
A nightingale.
Soul,  turn orange-colored.
Soul,  turn the color of love.

The second New York Public Library LIVE event I attend is a celebration of the life and work of the Spanish poet and dramatist, Frederico Garcia Lorca (1898-1936). The first was a conversation between Paul Holdengraber, who directs the LIVE program, and Matthew Barney, who currently has an exhibition of around 100 drawings at the prestigious, privately run Morgan Library.  The Lorca evening will be a little different because it is going to feature a number of prominent poets and performers who will read their own work alongside works by Lorca that have influenced their writing. The main reason I’ve booked tickets is because one of the performers will be Patti Smith, the poet, singer and artist who recalls her life with Robert Mapplethorpe in New York in the 60s and 70s in the award winning memoir Just Kids. I love that book and I want to see Patti Smith live.

The evening turns out to be much more of an event than I had originally anticipated because the performances run for two hours rather than one – and the program starts about 20 minutes late as well. I go with Kathy, the manager of Greene Street, who recently finished reading Just Kids herself  – and she also studied Lorca at college.

So here we are, in the beautiful Celeste Bartos Forum, waiting for the show to start. We’re sitting about five or six rows back in the second bank of seating from the stage area – even though we arrive early, all the best seats have been taken. I take pictures of the crowd and then Paul Holdengraber arrives and introduces the event, which has been specially organised to accompany an exhibition of Lorca’s work currently on view in the Library. Holdengraber is an incredibly eloquent speaker and, despite the rather tense nature of the conversation he had with Matthew Barney last time I was here, I am definitely a fan. 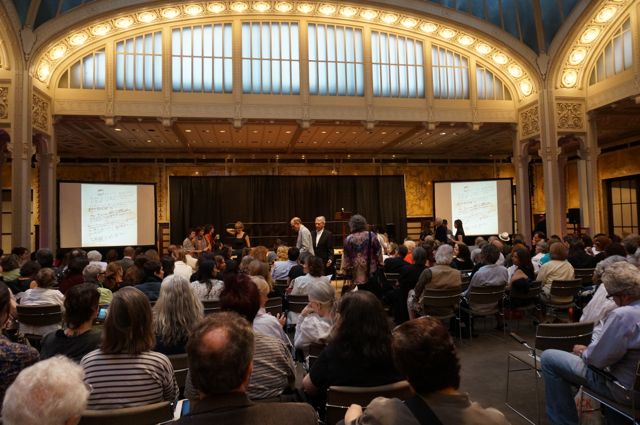 The lights are dimmed and the event starts with a series of very moving readings by US Poet Laureate (2011-12) Philip Levine, Pulitzer Prize winning Tracey K Smith and the Irish poetry editor of The New Yorker, Paul Muldoon. We are then treated to an extraordinary performance by English actor Will Keen, who recreates a lecture once given by Lorca. (I am completely stunned by the ability of actors to memorize complex streams of language.)  Keen is followed by John Giorno, who is perhaps best known for being the subject of Andy Warhol’s film Sleep. Giorno admits that he left the poem he wanted to read to us at home, a new poem that he would unfortunately not be able to recall well enough from memory. Instead, he recites another, older work, that he wrote on the occasion of his seventieth birthday, and which he knows by heart. It is an amazing poem and he performs it with such ease, such genuine emotion, and such power, that the audience is completely mesmerised. It is a mad poem, a drunk poem, a poem that shifts from old age to love, drugs, sex and the very creation of the universe.  It is, for me, the best and most memorable performance of the evening.

Will Keen is extraordinary

John Giorno – what a performance!

Giorno is followed by Keen again, who continues his version of a lecture by Lorca with another stellar performance. We also hear from Christopher Maurer, co-curator of the Lorca exhibition, and the elegant María Fernández Ache, Lorca’s niece, who reads some of her uncle’s poetry in Spanish. Then, right at the very end, it’s Patti Smith’s turn. She is dressed in jeans and an oversized black jacket and her long wavy hair, parted down the middle, is greying and unkempt. She almost seems nervous on stage, fiddling with something in one of her pockets. She is accompanied by a young guitarist who spends most of the performance with his head hung so low that all we see of him is his thick mop of shiny fair hair. Patti reads two poems and sings two songs and it is a magic moment to hear her speaking and singing live. I feel incredibly privileged – not just because I’ve seen Patti Smith performing, but because I have been part of the audience sharing in this wonderful program. 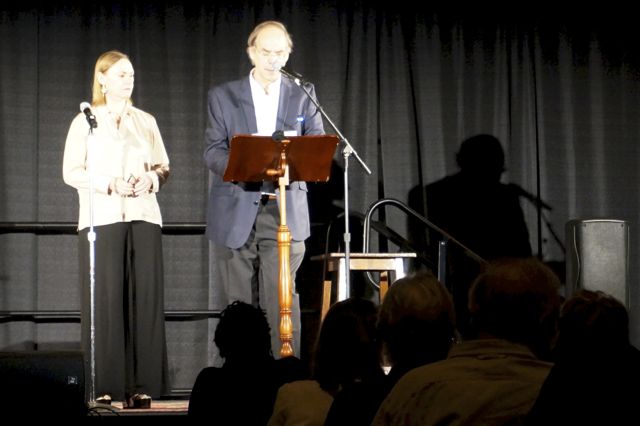 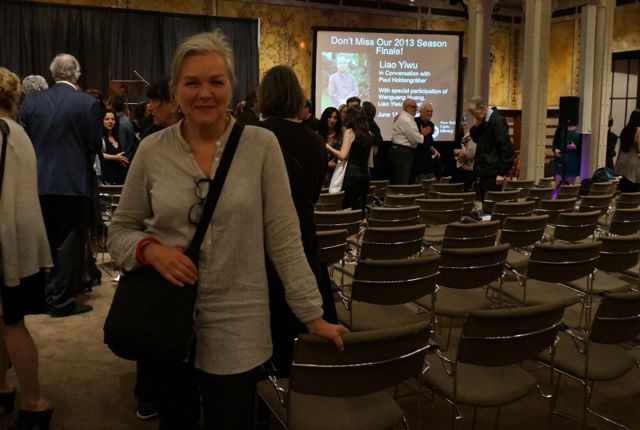 Afterwards, Kathy and I have a late dinner in a restaurant in Bryant Park at the back of the library. It’s a fairly balmy evening, and it’s so nice to sit outdoors, the darkness of the night illuminated by restaurant lamps and candles and the lights of the surrounding buildings.  A small magic moment in New York. 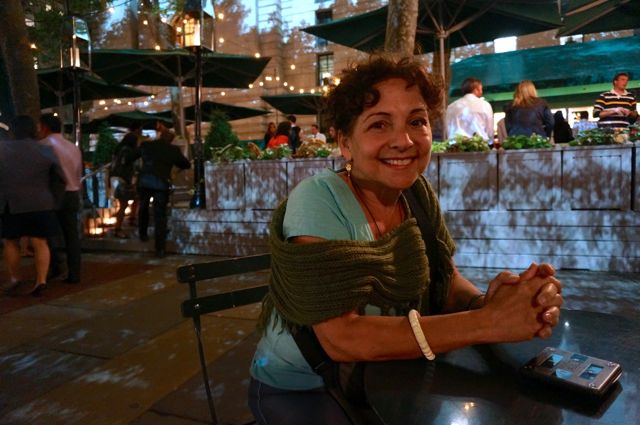 Dinner with Kathy at Bryant Park

A couple of days later, I pay my second visit to the Morgan Library to see Subliming the Vessel, the exhibition of drawings by Matthew Barney that opened very recently. I am not sure what to expect, but have heard some good reports, which I now find are totally justified. It is a compelling show and I spend over an hour examining Barney’s bizarre, delicate drawings and arrangements of books, images and items from the Morgan collection displayed in table-like glass cabinets. The lighting is low and moody; the works are very fine pencil drawings, incredibly detailed and obsessive, and quite small in scale. All the images on the walls are framed in Barney’s strange plastic, polythene and nylon frames (some of them ‘self-lubricating’) which add an alchemical, mystical, technological dimension to the work. The work is fantastical – there are strange shaped objects that seem pregnant with  inaccessible meaning, beings with genitals that turn into tree roots, weird anal penetrations, a whale showered in flecks of gold leaf… The images in the cabinets include Egyptian papyrus, illuminated manuscripts and a book that explains and illustrates Masonic rituals.  There are also two copies of Norman Mailer’s Ancient Evenings, opened at the first page and the last page, with pencil marks underlining the sentences that Barney was particularly drawn to.

In a second, smaller exhibition room, there are two works that are my favourites. One features Ancient Evenings resting on a block of salt crystals. The book has been cut in half horizontally and the edges of the pages are covered in gold leaf.  The other work features Hemingway’s The sun also rises and For whom the bell tolls, also resting on salt crystals. These are magical books – books for transportation and transformation.

Paul Holdengraber had tried to pry secret knowledge from Barney in his LIVE program interview a couple of weeks ago and Barney resisted, never answering a single question directly, always skirting around the nub of the issue.  These works I look at now evoke a deeply complex and unique vision of the world, one that combines symbolic references gleaned from history, popular culture, science, sport and literature – it is a shame that Barney was not able to share his reasons for making the connections he has made and why they are significant to his practice. I like the work – it is surreal and mysterious – but I feel I am an uninitiated observer.

Afterwards, I have lunch in the Morgan café, the most minimal and aesthetically calming museum café I have been to in New York, where I eat the most delicious wild mushroom risotto I have ever tasted. Then I take a docent led tour of Illuminating faith: the Eucharist in Medieval life and art, which is just opposite the entrance to the Barney show. The exhibition features more than sixty-five illuminated manuscripts that offer an insight into the significance of the Eucharist ceremony for Medieval society. Pierpont Morgan amassed a vast collection of early bibles and other religious texts, including exquisitely illustrated Books of Hours, which are featured in this show alongside objects that are used in the Eucharist ritual such as chalices and monstrances. Our docent is the highly articulate, knowledgeable and charming Miriam, who wears very distinctive earrings that I recognise immediately – two bright blue MET (Metropolitan Museum of Art) admission buttons neatly clipped to her ears – two ornate M’s to remember her name by.  It is a fascinating tour of immensely beautiful and intricately crafted works and a fitting end to this visit to the Morgan.

Miriam – you can just make out her blue MET earrings