Our last days in Greece are spent on the island of Crete, which has a long and tumultuous history of being ruled by other empires, including the Venetians and the Ottomans, and only officially became part of modern day Greece in 1913. Its ancient history is archeologically rich – this is where you can visit the remains of the extraordinary Palace of Knossos, first constructed around 1900 BC at the height of the Minoan civilization, a highly cultured, wealthy, peaceful and art-loving society. This is also where some of the very earliest forms of writing have been discovered – Linear A, which remains tantalisingly indecipherable, and Linear B, which was decoded by Michael Ventris in the first half of last century and reveals strong connections between Crete and the Mycenaean Greeks.

The ruins at Knossos – photo by Gerard

The Minoans worshipped the bull and held ceremonies where young men performed daring acrobatic feats, grabbing a bull by the horns and then summersaulting over the back of the animal before landing on their feet. While the Minoans were not a matriarchy, women paid a highly significant role in their religious culture, which was ruled by a bare-breasted goddess who is often depicted holding two snakes above her head. How fabulous!

A fresco at the Palace of Knossos illustrating acrobatic bull jumping (sorry about the reflection!)

We arrive in Heraklion, the main city, and I am sorry to say it is something of a shock after the sublime beauty of Santorini. The splendour of the Minoan age has been replaced by a rather grungy waterfront city with little aesthetic charm. And then we go to our hotel, which was so highly rated on Trip Advisor, only to be faced with more disappointment. Our room has clearly been recently refurbished, but it feels like a cell, with a window in a little alcove that overlooks the back of unattractive buildings and a rubbish dump. The tiles in the shower are mouldy and the beds (we were supposed to have a king sized bed but we have been given a double bed and a single bed) are rock hard – there is no give whatsoever when you sit down. We decide to stay only one night and move on to Chania, our second destination in Crete, earlier than we had originally planned. On reflection, we should have flown straight to Chania instead of Heraklion but at the time of booking this part of the journey, I didn’t know this was possible, nor did I know that Heraklion itself would not appeal to us. 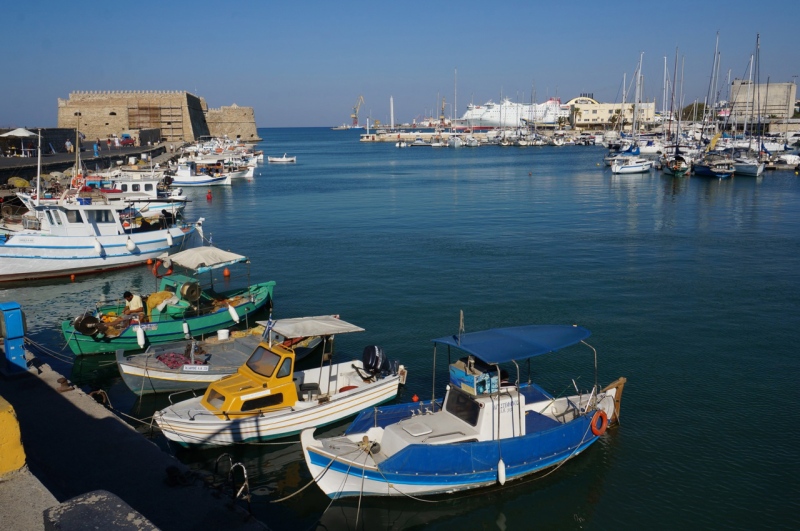 The Heraklion waterfront – looking quite attractive! 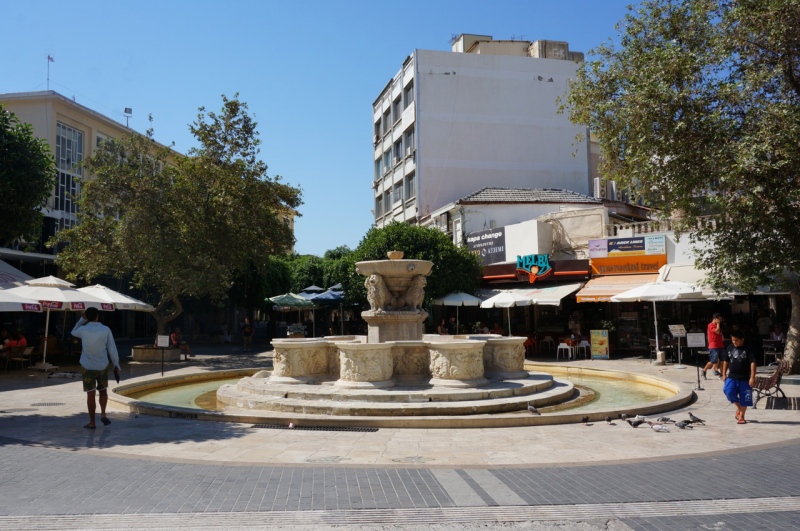 An ancient fountain in the centre of Heraklion

So, on our first afternoon, we visit the archaeology museum which, fortunately, is just wonderful. Here we see some extraordinary Minoan and Mycenaean frescoes, mosaics, sculptures, coins, jewellery and bronzes, reflecting the remarkable sophistication of this ancient civilization. One of the great highlights in the collection is the disc of Phaistos, a circular clay tablet created some time in the second millennium BC which is covered in 242 pictograms and symbols that no-one has yet been able to decode. It is considered one of the great archaeological mysteries of the world. I also love the clay figurines of women and goddesses, the stunning sculpture of a bull’s head and an incredibly delicate wreath of golden leaves.

The disc of Phaistos, one of the world’s greatest archaeological mysteries 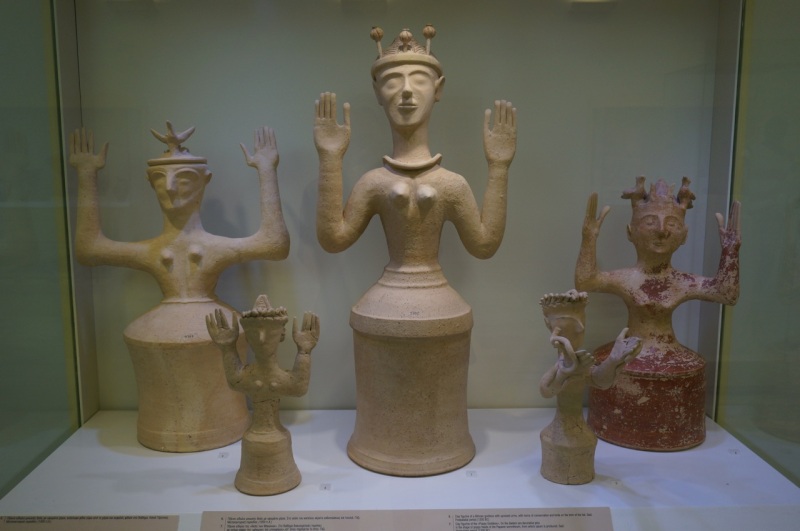 We actually have a wonderful dinner that evening not far from our hotel, in a little restaurant that spills out onto a cobblestoned street. The food is generous and delicious and Heraklion suddenly doesn’t seem so bad afterall. This is also where I discover how much I like ice-cold Greek raki – it is even better than vodka!

The next morning we catch a bus to the Palace of Knossos which is about 20 minutes from the centre of Heraklion and takes us through the most dense concentration of wedding shops I have ever seen. At the site, we decide to pay for a guided tour with a small group of 10 people. Of course, no-one can surpass Daphne, who took us to the Oracle at Delphi, but this guide, whose name I have sadly forgotten, is excellent.

Our guide to the Palace of Knossos

I am surprised about how much of Knossos has been uncovered and I don’t mind the reconstructions by Arthur Evans (which contemporary archaeologists are apparently not very happy about) because they offer some indication of just how magnificent Knossos was. The palace was undeniably the centre of Minoan Crete, an elaborate, multi-layered, labyrinthine construction that was destroyed about 200 years after it was first built, probably by the same volcanic eruption that turned Santorini into a caldera. It was rebuilt by the Greek Mycenaeans at a much larger scale. (Click here if you want to find out more.) I am in awe as I wander about the site, seeing something new as we turn every corner – it is huge and complex and incredibly sophisticated, with storage areas, lighting wells, an amazing drainage system and, of course, beautiful frescoes and relief works. For me, the most powerful of all the remains is the throne room – it seems that the throne itself contains the imprint of everyone who has ever sat on this beautifully designed, quite simple ceremonial chair.

Some reconstruction work by Arthur Evans

Waiting to see the throne room

Later that afternoon we book out of our hotel and head for Chania, which is about two and a half hours away by bus. After the chaos of buying our tickets and finding the right bus, we decide to sit up front, in the two seats right behind the driver. It seems such an excellent spot, with great views out the front window, but the gods of happy travelling are not smiling upon us, because as soon as the bus departs, the driver lights up a cigarette. He opens his window and occasionally hangs his hand outside, but the smoke still wafts back over us. Never mind, we say to each other, he’ll finish it soon and then we’ll be fine. But no, as soon as the first cigarette is finished, the next is started. The man is a chain smoker and goes through 8 cigarettes before I lose count and we move to the back of the bus where, finally, there are some spare seats.

Beyond Heraklion, the Cretan landscape reveals itself as mountainous and rocky with dramatic beaches and acres and acres of olive trees.  As we near Chania, I am both surprised and a little alarmed to drive by a large military base, later discovering that the US, NATO and Greece all have stations here. Chania itself has a modest charm; historically it was an important ancient Minoan town and today reflects a unique mixture of east meets west. We are incredibly happy that we decided to come here earlier than planned. Our hotel is just delightful and I can’t believe how happy I am now that we have a comfortable room, complete with a balcony overlooking a park with a small zoo that houses a family of goats. The service in the hotel is excellent and, most importantly, the beds actually have some give! (I have subsequently discovered that beds in Greece and in Turkey are known to be hard.)

Relaxing in the foyer of our wonderful hotel in Chania 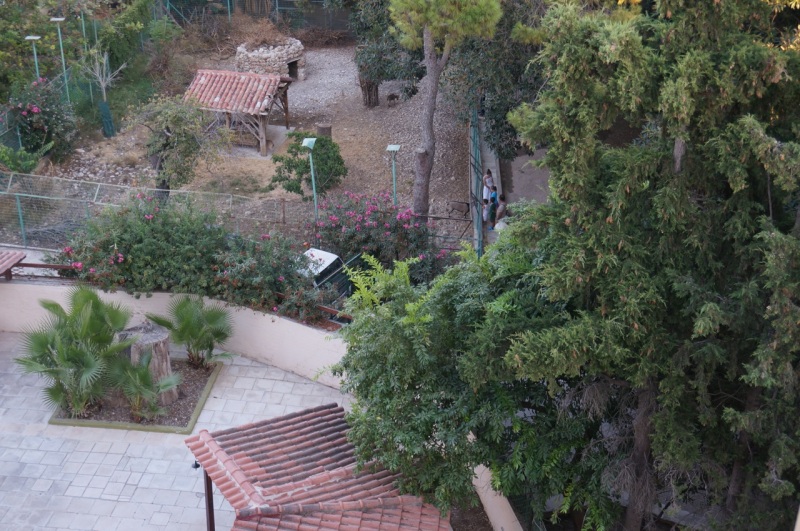 The view from our balcony – you might just be able to see the goats!

We have two nights here and the equivalent of almost two days, not long enough, really, but enough time to take in the major sites Chania has to offer and to know that this is a place we would love to return to. The historic old town is a wonderful maze of streets and windy alleyways that all eventually lead to a rather romantic waterfront lined with outdoor restaurants that look towards a little lighthouse. The water glistens and the buildings reflect a Turkish influence. There are endless stalls and shops along the major streets but in the smaller alleyways near the old town fortifications, we find lots of beautiful small boutique stores that sell jewellery, ceramics and textiles. 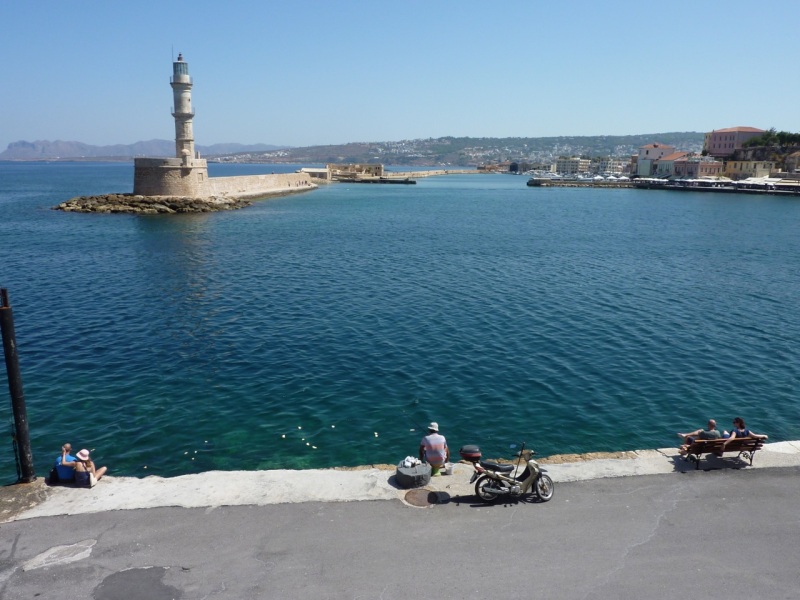 The lighthouse, originally built by the Venetians in 1595, turned into a minaret  around 1839 and restored back to a lighthouse in 2006!

The waterfront at night

On our second evening, as we head home from an afternoon at Nea Chora, the local beach, I see a couple enjoying a wonderful platter of food in a tiny restaurant. We sit down and ask for the same. The food is delicious and unbelievably inexpensive, and we end up having a great conversation with the Canadian couple whose meal we copied.

The old town has a superb indoor market and a square with a stunning Greek Orthodox church. There is also a wonderful Byzantine museum in a very small chapel not far from the waterfront. The archaeology museum is in a converted church that was dedicated to St Francis of Assissi and we spend a couple of hours exploring its treasures. I am particularly drawn to the Minoan burial caskets, made from clay and decorated with simple curved patterns. David Walsh, the owner of the Museum of Old and New Art in Hobart, has one of these in his collection and for a while, it was exhibited in a room directly opposite my installation, Kryptos, which references the idea of a crypt. I felt incredibly honoured to have such an ancient and beautiful artefact in conversation with my work. 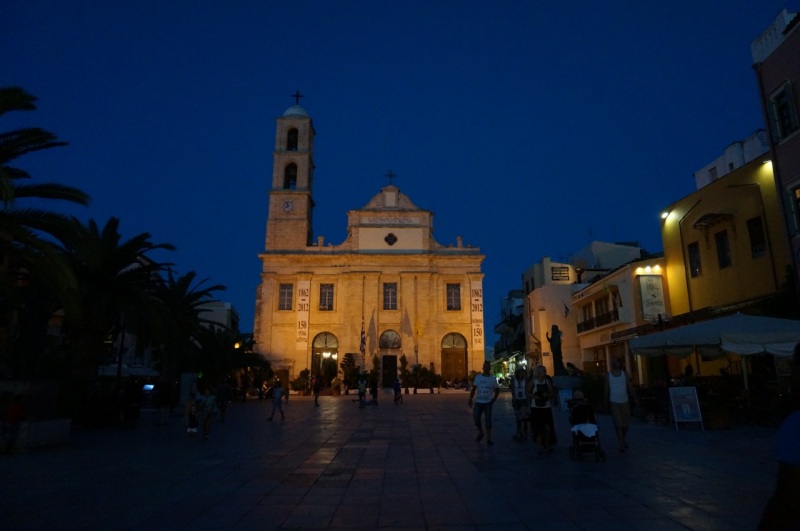 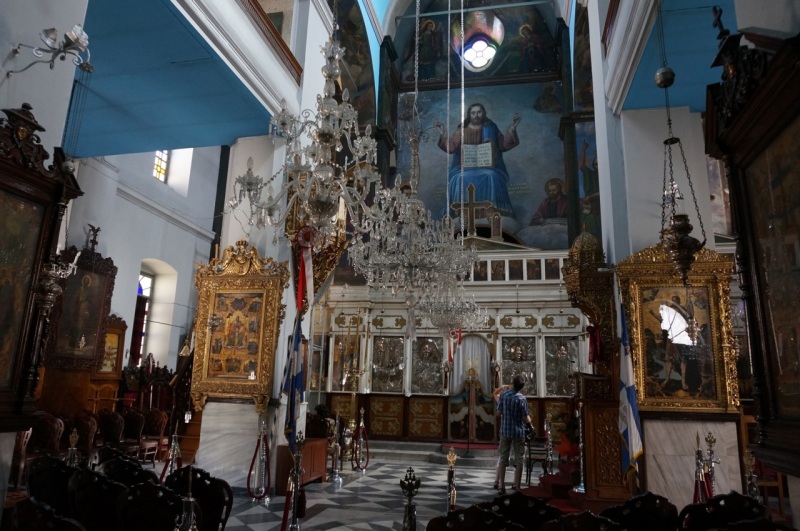 Inside the Greek Orthodox church

Minoan burial caskets in the Chania Museum of Archaeology

Artfacts in the museum, including a child’s toy 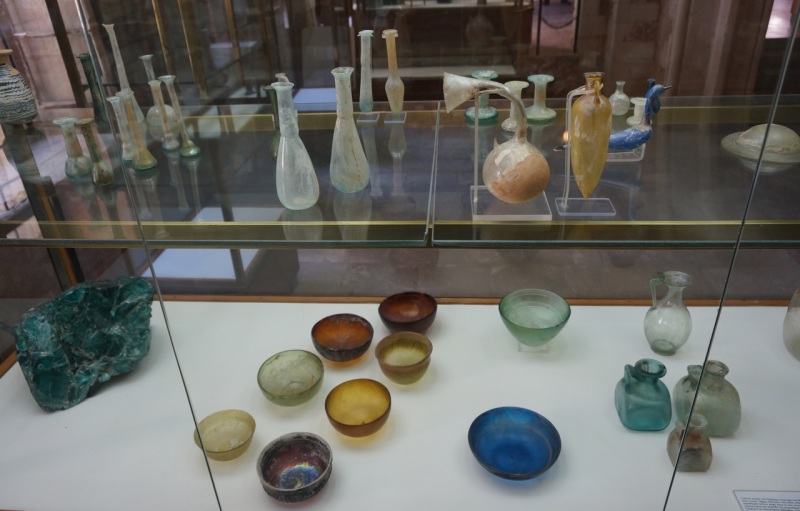 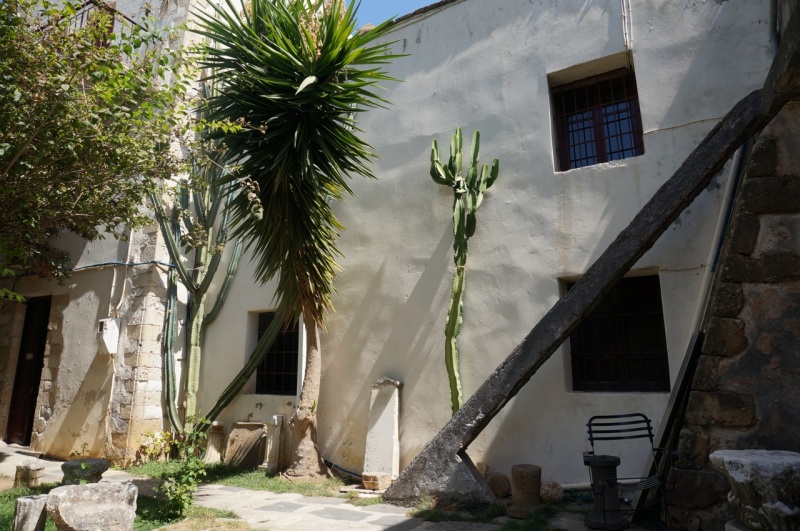 The courtyard garden where we have a rest

On our last afternoon in Chania, we also go on a glass-bottomed boat trip that takes us beyond the lighthouse and out to a small island near the local beach. While we don’t see much through the glass bottom, we do get some wonderful views of the city from the water and Gerard also does a bit of snorkelling. 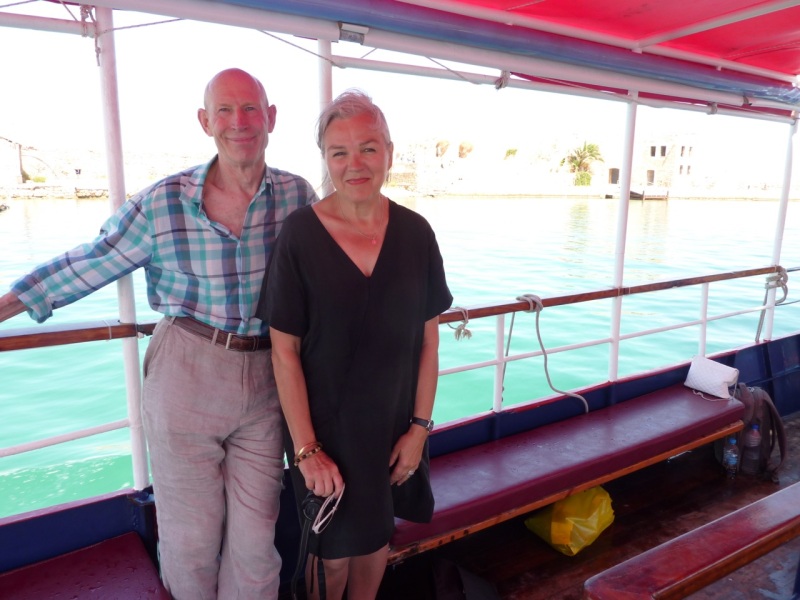 On our little boat trip – we’re actually NOT sunburnt – that’s just the reflection of the red canopy on the boat!

Our time in Chania comes to an end and we have to travel back to Heraklion to catch our flight to our next and final destination – Istanbul. It’s at the airport that we see a wonderful sign featuring a woman with a cigar that shows the way to the smoking room.

At our stopover in Athens, where we change planes, I notice someone familiar sitting at the boarding gate and I also recognise his distinctive voice – it’s Alexander Downer, the ex Minister for Foreign Affairs under the Howard government. I almost want to approach him and say hi, but think better of it. And then, as our boarding passes are being checked, I am stopped by the air steward. My passport is whisked away from me, eyed with some suspicion, and checked online before I am allowed to proceed. I have been using my Latvian passport all through my time in Europe without any trouble – I wonder what the problem was.